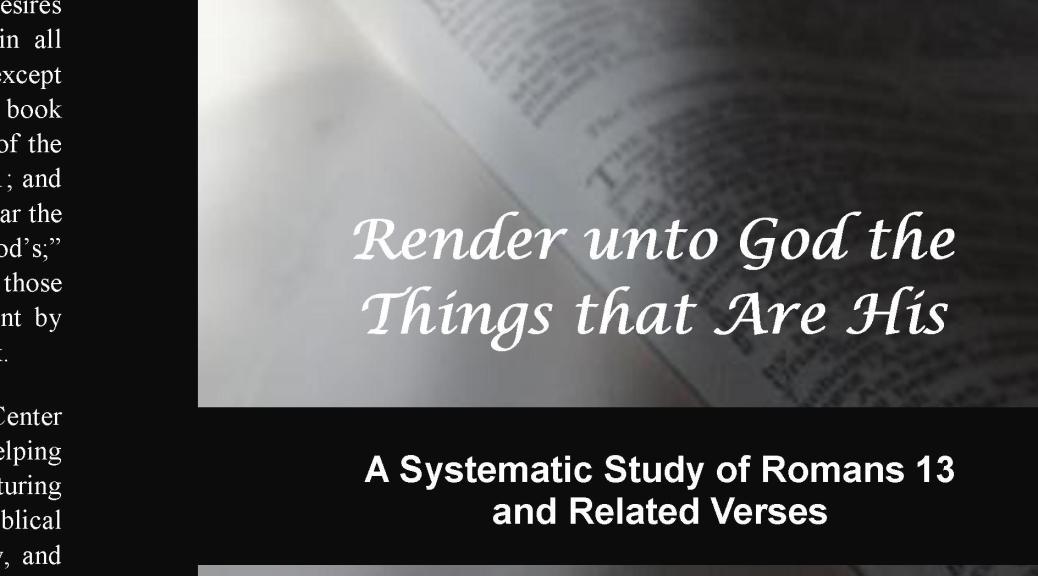 Click here to go to “Self-exam Questions: Submit to Every Ordinance of Man? 1 Peter 2.13”
[To be added when time permits]

Links to all chapters of “Render Unto God the Things that Are His: A Systematic Study of Romans 13 and Related verses” is at the bottom of this article.

Sermons and teachings:
Pastor Jason Cooley, “1 Peter 2.13: Proper Submission to Government,” August, 2012
Jerald Finney’s Audio Teaching on 1 Peter 2:13
I Peter 2.13: “Submit yourselves to every ordinance of man….”
To download right click link to audio and left click “Save link as…”

“The forming of the constitution and appointment of the particular orders and offices of civil government is left to human discretion, and our submission thereto is required under the name of their being the ordinances of men for the Lord’s sake, 1 Pet. ii, 13, 14. Whereas in ecclesiastical affairs we are most solemnly warned not to be subject to ordinances after the doctrines and commandments of men, Col. ii, 20, 22” (Isaac Backus, “An Appeal to the Public for Religious Liberty,” Boston 1773, an essay found in Isaac Backus on Church, State, and Calvinism, Pamphlets, 1754-1789, Edited by William G. McLoughlin (Cambridge, Massachusetts, 1968), p. 313).

1 Peter 4:12-19: “Beloved, think it not strange concerning the fiery trial which is to try you, as though some strange thing happened unto you: But rejoice, inasmuch as ye are partakers of Christ’s sufferings; that, when his glory shall be revealed, ye may be glad also with exceeding joy. If ye be reproached for the name of Christ, happy are ye; for the spirit of glory and of God resteth upon you: on their part he is evil spoken of, but on your part he is glorified. But let none of you suffer as a murderer, or as a thief, or as an evildoer, or as a busybody in other men’s matters. Yet if any man suffer as a Christian, let him not be ashamed; but let him glorify God on this behalf. For the time is come that judgment must begin at the house of God: and if it first begin at us, what shall the end be of them that obey not the gospel of God? And if the righteous scarcely be saved, where shall the ungodly and the sinner appear? Wherefore let them that suffer according to the will of God commit the keeping of their souls to him in well doing, as unto a faithful Creator.”

1 Peter 2.13, quoted below along with 1 Peter 2.9-12 and 14-20 to put the verse into it’s immediate context, is often cited, again alone and out of context, to support almost total submission to civil government.

“9 But ye are a chosen generation, a royal priesthood, an holy nation, a peculiar people; that ye should shew forth the praises of him who hath called you out of darkness into his marvellous light: 10 Which in time past were not a people, but are now the people of God: which had not obtained mercy, but now have obtained mercy. 11 Dearly beloved, I beseech you as strangers and pilgrims, abstain from fleshly lusts, which war against the soul; 12 Having your conversation honest among the Gentiles: that, whereas they speak against you as evildoers, they may by your good works, which they shall behold, glorify God in the day of visitation. 13 Submit yourselves to every ordinance of man for the Lord’s sake: whether it be to the king, as supreme; 14 Or unto governors, as unto them that are sent by him for the punishment of evildoers, and for the praise of them that do well. 15 For so is the will of God, that with well doing ye may put to silence the ignorance of foolish men: 16 As free, and not using your liberty for a cloke of maliciousness, but as the servants of God. 17 Honour all men. Love the brotherhood. Fear God. Honour the king. 18 Servants, be subject to your masters with all fear; not only to the good and gentle, but also to the froward. 19 For this is thankworthy, if a man for conscience toward God endure grief, suffering wrongfully. 20 For what glory is it, if, when ye be buffeted for your faults, ye shall take it patiently? but if, when ye do well, and suffer for it, ye take it patiently, this is acceptable with God” (1 Pe. 2.9-20).

If the above verses had only stated, “Submit yourselves to every ordinance of man” and nothing more, the statement would have contradicted the entirety of Scripture. However, the verse in its immediate context can only be analyzed as was Romans 13, and such an analysis renders the verse consistent with the rest of God’s Word. Much of the analysis of Romans 13 could be considered and included in this analysis of 1 Peter 2.13 but will not be repeated in this article.

In addition to the scriptural context covered in the article on Romans 13, one must consider, as to 1 Peter 2.13, such texts as 1 Peter 2.9-12 and 14-20 to put the verse into it’s immediate context. Venturing further, one should look at 1 Peter 4.12-19 which is quoted above. Then, one can go to the book of Acts, and such verses as Acts 3-5. In Acts 3, Peter, the author of 1 and 2 Peter, healed a lame man and preached repentance, conversion, Jesus Christ. In Acts 4, Peter and John were arrested because they “taught the people, and preached through Jesus the resurrection from the dead” (Ac. 4.2). They “commanded them not to speak at all nor teach in the name of Jesus” (Ac. 4.18).

“But Peter and John answered and said unto them, Whether it be right in the sight of God to hearken unto you more than unto God, judge ye. For we cannot but speak the things which we have seen and heard. So when they had further threatened them, they let them go, finding nothing how they might punish them, because of the people: for all men glorified God for that which was done. For the man was above forty years old, on whom this miracle of healing was shewed. And being let go, they went to their own company, and reported all that the chief priests and elders had said unto them. And when they heard that, they lifted up their voice to God with one accord, and said, Lord, thou art God, which hast made heaven, and earth, and the sea, and all that in them is: Who by the mouth of thy servant David hast said, Why did the heathen rage, and the people imagine vain things? The kings of the earth stood up, and the rulers were gathered together against the Lord, and against his Christ. For of a truth against thy holy child Jesus, whom thou hast anointed, both Herod, and Pontius Pilate, with the Gentiles, and the people of Israel, were gathered together, For to do whatsoever thy hand and thy counsel determined before to be done. And now, Lord, behold their threatenings: and grant unto thy servants, that with all boldness they may speak thy word, By stretching forth thine hand to heal; and that signs and wonders may be done by the name of thy holy child Jesus. And when they had prayed, the place was shaken where they were assembled together; and they were all filled with the Holy Ghost, and they spake the word of God with boldness” (Ac. 4.19-31).

The apostles, including Peter, continued to preach, teach, and heal in the name of Jesus. As a result, as one can read in Acts 5, the high priest and those that were with him imprisoned them. They were brought before the high priest and the captain of the temple and the chief priests who said to them, “Saying, Did not we straitly command you that ye should not teach in this name? and, behold, ye have filled Jerusalem with your doctrine, and intend to bring this man’s blood upon us.” (Acts 5.28). 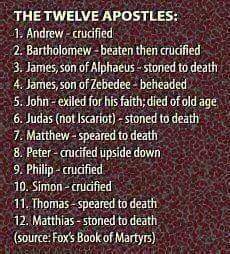 “Then Peter and the other apostles answered and said, We ought to obey God rather than men.The God of our fathers raised up Jesus, whom ye slew and hanged on a tree. Him hath God exalted with his right hand to be a Prince and a Saviour, for to give repentance to Israel, and forgiveness of sins. And we are his witnesses of these things; and so is also the Holy Ghost, whom God hath given to them that obey him” (Ac. 5.29-32). They called the apostles, beat them, and “commanded that they should not speak in the name of Jesus, and let them go” (Ac. 5.40). Of course, the apostles and the followers of Jesus continued to obey God rather than men, and as a result, were martyred for their faith, Peter being crucified upside down.

Bible experts have commented on 1 Peter 2.13: 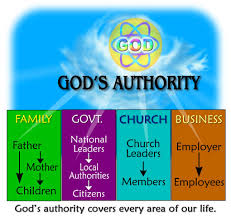 Render Unto God the Things that Are His: A Systematic Study of Romans 13 and Related Verses: