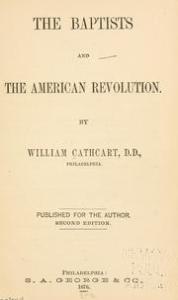 1775 closed the period of “Intolerance, Toleration, and Persecution.”

The Baptists were ready to push for religious freedom and abolition of the establishment. In their Association meeting on the fourth Saturday of May 1775, “they were to a man favorable to any revolution by which they could obtain freedom of religion. They had known from experience that mere toleration was not a sufficient check, having been imprisoned at a time when that law was considered by many as being in force.” “The Revolutionary War opened up possibilities to overthrow the entire system of persecution…. [Baptists] were everywhere the friends of liberty…. There was not a tory among the Baptists of America.”[2] They received the highest praise for their patriotic endeavors.[3]

The Baptists decided to circulate petitions throughout the state calling for abolition of the church establishment and freedom of religion, and also to appoint commissioners to present their address for military resistance to British oppression and “offering the services of their young men as soldiers and asking only that, so far as the army was concerned, their ministers might enjoy like privileges with the clergy of the Established church” to the State Convention which was the House of Burgess under a new name and in a different character. The Convention, still controlled by “the same class that had, a few years before made concessions to the … Presbyterians on condition that they settle on the western counties forming a line of defense against the Indians, resolved to allow those dissenters in the military who so desired to attend divine worship administered by dissenting preachers. This first step towards placing all Virginia clergy on an equal footing, came as a result of the need for the numerical strength of the Baptists in what was considered by the establishment in 1775 a “struggle for their rights ‘in the union’ [with England].” The Convention maintained their “faith and true allegiance to His Majesty, George the Third, [their] only lawful and rightful King.” “It would have been very impolitic, even if their petitions had been ready, to have sprung the question of disestablishment upon [the Convention] before they had committed themselves to the cause of independence.”[4]