Click here to listen to Jerald Finney’s audio teaching on the “Conclusion to articles on the biblical doctrine of ‘Church’”.

Conclusion to Articles on the Biblical Doctrine of “Church”

The Supreme Ruler ordained the church, as He ordained civil government. He gave churches—as He has given individual, family and civil governments—His Word wherein they can learn God’s guidelines which He wishes His churches, as well as all other governments, to follow. Satan has successfully misled most churches and other governments, and most have followed his principles. He has used false teachers from the beginning. As a result, apostasy crept into the church shortly after its inception. That apostasy has accelerated in America as the  tribulation approaches.

Many or most people in American churches today are materially rich, but spiritually blind. “Because thou sayest, I am rich, and increased with goods, and have need of nothing; and knowest not that thou art wretched, and miserable, and poor, and blind, and naked” (Re. 3.17). 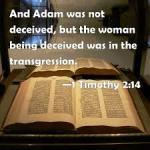 Adam was not deceived, but the woman being deceived was in the transgression (1 Ti. 2.14, Ro. 5.14, Ge. 3.1-6).  Christ was not deceived, but His bride was. “As the first Adam had to give up a perfect existence in order to be with his wife, so the last Adam, Christ (1 Co. 15.22, 45), stepped down from heaven to save his bride. While the first Adam ‘blew it,’ the last Adam would make everything right! (Ro. 5:12-21) Charles Wesley set this doctrine to music with the words, ‘Second Adam from above, reinstate us with thy love.’ … “The all-important verse that connects this typology to the present Laodicean apostasy is Ec. 1:9a: ‘The thing that hath been, it is that which shall be; and that which is done is that which shall be done….’ Thus, the history of mankind will undoubtedly end the same way it began—with a bride being deceived!” (William P. Grady, How Satan Turned America Against God (Knoxville, Tennessee: Grady Publications, Inc., 2005), p. vii.).

“For God so loved the world, that he gave his only begotten Son, that whosoever believeth in him should not perish, but have everlasting life. For God sent not his Son into the world to condemn the world; but that the world through him might be saved. He that believeth on him is not condemned: but he that believeth not is condemned already, because he hath not believed in the name of the only begotten Son of God. And this is the condemnation, that light is come into the world, and men loved darkness rather than light, because their deeds were evil” (Jn. 3.16-19).

“[Jesus], being in the form of God, thought it not robbery to be equal with God: But made himself of no reputation, and took upon him the form of a servant, and was made in the likeness of men: And being found in fashion as a man, he humbled himself, and became obedient unto death, even the death of the cross” (Ph. 2.6-8).

Regardless of this inevitable apostasy and the events that are to follow, things are looking good for you and me—that is, if you are a Christian! Christians have the ultimate hope: they will reign with the Lord. This should be a cause for great rejoicing as well as incentive to be responsible members of a local autonomous New Testament church and to make sure that every effort is made to glorify God and assure that a church remains totally under Christ in every way. The Holy Spirit is now calling out, not the subjects, but the co-heirs and co-rulers of the kingdom.

“And hath made us kings and priests unto God and his Father; to him be glory and dominion for ever and ever. Amen” (Re. 1.6).

“For ye have not received the spirit of bondage again to fear; but ye have received the Spirit of adoption, whereby we cry, Abba, Father.’ The Spirit itself beareth witness with our spirit, that we are the children of God: And if children, then heirs; heirs of God, and joint heirs with Christ; if so be that we suffer with him, that we may be also glorified together. For I reckon that the sufferings of this present time are not worthy to be compared with the glory which shall be revealed in us” (Ro. 8.15-18).

“Do ye not know that the saints shall judge the world? and if the world shall be judged by you, are ye unworthy to judge the smallest matters? Know ye not that we shall judge angels? how much more things that pertain to this life” (1 Co. 6.2-3)?

Churches under Christ Ministry is under the authority of Charity Baptist Tabernacle of Amarillo, Texas, Benjamin Hickam Pastor. Jerald Finney, a Christian Lawyer and member of Charity Baptist Tabernacle explains how a church in America can remain under the Lord Jesus Christ and Him only. "And hath put all things under his feet, and gave him to be the head over all things to the church" (Ephesians 1.22).

Follow Churches Under Christ Ministry: Church organization according to Bible doctrine and the First Amendment on WordPress.com