Thus, “[i]n [these] later stages of disestablishment there was a curious alliance formed between the Episcopalian and Presbyterian clergy with an eye to creating a new line of defense.”[1] “In 1784, the Virginia House of Delegates having under consideration a ‘bill establishing provision for teachers of the Christian religion,’ postponed it until the next session, and directed that the Bill should be published and distributed, and that the people be requested ‘to signify their opinion respecting the adoption of such a bill at the next session of assembly.”[2] This last action was a result of a resolution offered by the Baptists and adopted by the Legislature. The Baptists, appearing to be losing ground as the only opponents of a general assessment, the majority of the Legislature being churchmen, the only hope of the opponents of the assessment was an appeal to the people.[3]

The bill—which was proposed by Patrick Henry and supported by George Washington, Richard Henry Lee, and John Marshall—provided for the establishment a provision for teachers of the Christian religion, in effect providing for the “establishment of Christianity, but without precedence in such an establishment to any particular church.”[4] The bill required all persons

“to pay a moderate tax or contribution annually for the support of the Christian religion, or of some Christian church, denomination or communion of Christians, or for some form of Christian worship.”[5]

Pfeffer does not understand that God has given civil government the choice of whether to honor his principles. The government is to intervene, according to God’s word, to control and restrain certain crimes. Government does not support religion in order to do its job. Government merely makes a choice of whether to honor God and his principles for the purpose of restraining vice and preserving peace.

James Madison, among others, opposed the bill. Mr. Madison had witnessed and opposed the persecution of the Baptists in his own state.

Mr. Madison prepared his famous “Memorial and Remonstrance,” in which he maintained “that religion, or the duty we owe the Creator,” was not within the cognizance of civil government. The “Memorial” presents fifteen arguments against the assessment bill.[8] One historian says of this document, “For elegance of style, strength of reasoning, and purity of principle, it has, perhaps, seldom been equaled, certainly never surpassed, by anything in the English language.”[9] “Dr. George B. Taylor says: ‘It may certainly be called a Baptist document this far, that they only, as a people, held its views, and pressed those views without wavering.’”[10] Dr. E. G. Robinson wrote of the document:

One must keep in mind that although the document advocated freedom of conscience, something for which Baptists had long struggled, the tone was that of deistic or humanistic arguments based upon reason and natural law. As pointed out supra, Jefferson and Madison and other deistic separatists “were interested in leaving the mind free to follow its own rational direction.” A trust in man’s reason without consideration of principles in the word of God is a leaven which eventually totally pollutes. Tragically, the pietistic arguments of Isaac Backus never prevailed in America. America never fully proceeded upon the lessons taught by the Bible, and implemented by Roger Williams, John Clarke, and the other founders of Rhode Island. 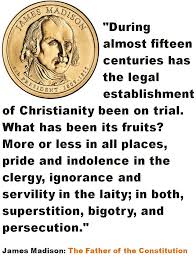 Click here to go to PDF of James Madison’s Memorial and Remonstrance. Here are just a few excerpts:

Madison, who led the opposition, was able to obtain a postponement of consideration of the bill from December 1784 to November 1785. Before adjourning, the legislature passed a bill which incorporated the Protestant Episcopal Church “deemed necessary in order to regulate the status of that church in view of the severance of its subordination to the Church of England that had resulted from the Revolution. The bill gave the Episcopal ministers title to the churches, glebes, and other property, and prescribed the method of electing vestrymen. Even Madison voted for the incorporation bill, though reluctantly and only in order to stave off passage of the assessment bill. Nonetheless, the incorporation bill aroused a good deal of opposition.”[13]

[8] Pfeffer, p. 101. Pfeffer states that “[i]t is important to note the emphasis the ‘Memorial’ places on ideological factors.” His comments following that quote ignore the references to our “creator,” and the “Governor of the Universe.”