This article presents a question on AVVO, a legal website, asked by person who practices homosexual conduct, and my answer. On September 14, 2014, I was notified that the question asker picked mine as the best answer. The following, before the article, is a copy of that notification: 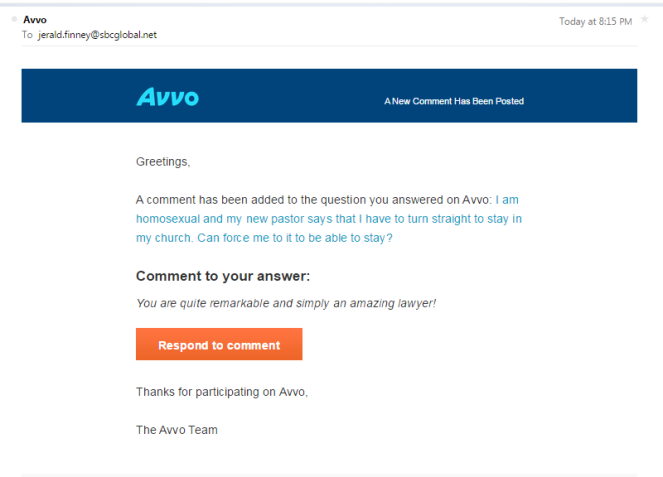 The following question was asked on AVVO, a legal website on 090815:

“I am homosexual and my new pastor says that I have to turn straight to stay in my church. Can force me to it to be able to stay?

“I have gone to the same church for 11 years. I have never had a problem in my church even if I am openly gay and dress quite feminine. We have a new pastor since a year and he has tried to talk me into becoming straight since day one. Clearly, he is quite homophobic…. I have been able to laugh about if until now, but he is now trying to put pressure on my by the other pastors.

“They have never had a problem with me before. Suddenly they want me to dress differently and “become straight”.

“I am feeling harassed by my pastor and he even talked about me in church yesterday. It was clearly about me and I could feel the hostility.

“What can I do? Can I even try to do something legal against my pastor or is he protected by the law since he is God’s voice?”

My answer  to the above question was as follows:

“Yours is not like the case in which the baker refused to do a wedding cake for homosexuals. That was a business. Your dispute is with a church. Businesses are not covered by the First Amendment whereas churches are. The First Amendment says:

“‘Congress shall make no law respecting an establishment of religion, or prohibiting the free exercise thereof; or abridging the freedom of speech, or of the press; or the right of the people peaceably to assemble, and to petition the Government for a redress of grievances.’

“One can read the history of the First Amendment at: https://opbcbibletrust.wordpress.com/contents/onl….

“An abbreviated version of that history is at: https://opbcbibletrust.wordpress.com/2010/01/06/a….

For the history incorporated with an examination of both Christian and Secular Historical revisionism of the history of the First Amendment see https://opbcbibletrust.wordpress.com/god-betrayed/books/the-trail-of-blood-of-the-martyrs-of-jesus/

“I cannot fully answer your question in this forum, but I will give you an answer in a nutshell with additional resources for more detailed study.

“If your church is totally under the First Amendment (has not become a legal entity by incorporating, getting Internal Revenue Code Section 501c3 or Section 508 status, etc.), you have no legal recourse whatsoever against your church.

“To look at church legal entity status one can go online to https://opbcbibletrust.wordpress.com/contents/boo….

“The courts have not yet addressed the question of violation of fundamental public policy in the church (religious organization) context. As I said above, the courts have no jurisdiction over the purely spiritual church (the non-legal entity) church; such a church in America may still operate according to the principles in the Bible without civil government jurisdiction and persecution.

“You will need someone to help you who is well-versed in the law should you desire to proceed legally. The res
End – out of characters”

To go the the webpage of the above question with answers from other attorneys, click here.

Virginia Passes Legislation Forcing Churches to Allow “Transgender” Males into Women’s Bathrooms (04720)(Of course, this will be contested in court. Regardless of the outcome of such contest(s), keep in mind that the established church (incorporated, 501(c)(3) or 501(c)(1)(A) churches have voluntarily given up much of their First Amendment protections and placed themselves under the 14th Amendment for many purposes. Churches who choose to remain under the First Amendment for all purposes are not subject to state legislation. Contact this Churches under Christ Ministry for more information.)

2 thoughts on “Can a church force a homosexual to turn straight to stay in the church?”