Next Lesson:
III. The Puritan Tradition in Connecticut; The Saybrook Platform; Persecutions and Inequities Drive Many to the New Light Position as Separatists; Many Became Baptists

Links to all lessons on “The Separates and the Baptists in New England.” 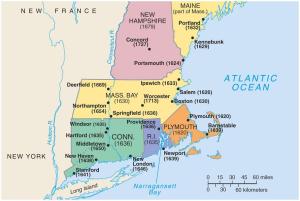 There was great prejudice against Baptists. England forced New England to exempt Baptists from taxation in 1728, but the establishment found ways to circumvent this exemption. Operating clandestinely because of opposition by the authorities, Baptist preachers had come into Connecticut from Rhode Island, as they had done in Massachusetts, starting in 1674. They made some converts and even started some churches in Connecticut in 1704, 1710, 1735, and 1740. All dissenters were taxed to support the established church unless certified to pay the tax to their own churches. To be exempted they had to regularly attend their own church and live within five miles of their meeting place. Those who belonged to no church were also assessed the tax.[1] However, Separates were not given the privileges accorded Baptists, Quakers, and Anglicans.

One of the most prominent of the Separates was Isaac Backus. Although he spent much of his ministry in Massachusetts, he was a native of Norwich, Connecticut. In the new movement, he became the leading figure; and his shift from the Separate to the Baptist camp is central to the religious history of New England.[2]

Two years later, he, his mother, and some of his other relatives walked out of the established Norwich Church they belonged to and started holding meetings of their own. They left the church because the church voted to admit new members by a majority vote without evidence of conversion, the minister appeared to think that the Lord’s Supper was a converting ordinance, and the church exhibited a “strong affection for the Saybrook scheme.”

A revolution had begun.

Churches under Christ Ministry is under the authority of Charity Baptist Tabernacle of Amarillo, Texas, Benjamin Hickam Pastor. Jerald Finney, a Christian Lawyer and member of Charity Baptist Tabernacle explains how a church in America can remain under the Lord Jesus Christ and Him only. "And hath put all things under his feet, and gave him to be the head over all things to the church" (Ephesians 1.22).

Follow Churches Under Christ Ministry: Church organization according to Bible doctrine and the First Amendment on WordPress.com