Next Chapter:
B. Bible Doctrine of Church

Click here to go to links to all written lessons on Satan.

Click here to go to the 5 minute video lectures. 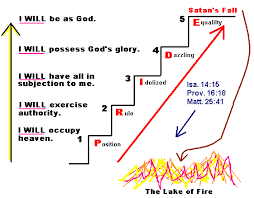 Sometime long ago, even before God created the heavens and the earth, God created Lucifer. God gave Ezekiel a vision of Lucifer, before his fall and in his God-ordained place.

“Thus saith the Lord GOD; Thou sealest up the sum, full of wisdom, and perfect in beauty. Thou hast been in Eden the garden of God; every precious stone was thy covering, the sardius, topaz, and the diamond, the beryl, the onyx, and the jasper, the sapphire, the emerald, and the carbuncle, and gold: the workmanship of thy tabrets and of thy pipes was prepared in thee in the day that thou wast created.  Thou art the anointed cherub that covereth; and I have set thee so: thou wast upon the holy mountain of God; thou hast walked up and down in the midst of the stones of fire. Thou wast perfect in thy ways from the day that thou wast created, till iniquity was found in thee.” (Ez. 28.11-15).

Lucifer’s pride took hold and he placed his will above God’s will. He rebelled against God, thereby introducing sin into the universe.

“How art thou fallen from heaven, O Lucifer, son of the morning! how art thou cut down to the ground, which didst weaken the nations!  For thou hast said in thine heart, I will ascend into heaven, I will exalt my throne above the stars of God: I will sit also upon the mount of the congregation, in the sides of the north: I will ascend above the heights of the clouds; I will be like the most High. Yet thou shalt be brought down to hell, to the sides of the pit. They that see thee shall narrowly look upon thee, and consider thee, saying, Is this the man that made the earth to tremble, that did shake kingdoms; That made the world as a wilderness, and destroyed the cities thereof; that opened not the house of his prisoners” (Is. 14.12-17)? 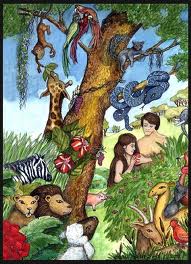 Satan began to war against God through God’s highest creation, man. His assault on God began in the Garden of Eden. His tactics succeeded, so he thought. Satan seduced Eve with the same temptation whereby he was tempted: “I will be like the most High.” He said to Eve:” “For God doth know that in the day ye eat thereof, then your eyes shall be opened, and ye shall be as gods, knowing good and evil” (Ge. 3.5).

At the fall, Satan became the God of this world. From that moment on, Satan has carried on a relentless attack against God through God’s highest creation, man, and against all those institutions ordained by God—the individual, the family, the nations (civil governments), and the church.

God has never hidden his plans from Satan. God let Satan know about the coming Messiah. God said to Satan, “And I will put enmity between thee and the woman, and between thy seed and her seed; it shall bruise thy head, and thou shalt bruise his heel” (Ge. 3:15)(By “her seed” and “his heel” God was referring to the Lord Jesus Christ). Throughout the Old Testament, we see Satan’s attempts to destroy the line leading to the Lord Jesus. He never succeeded, but he continues to war against God. Satan knows that if he can prove God wrong about his plans at any point before he is cast into the lake of fire, he will have defeated God.

In the next lesson, we will look at the Satanic Beast System and the Fate of the Beast. The system was already at work in the beginning days of the New Testament church.