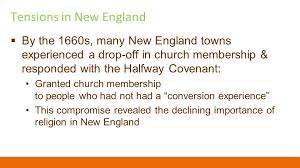 Previous Lesson: VI. The Theology and Goals of the Puritans in America

Click here for links to all lessons on The Pilgrims and Puritans in New England. 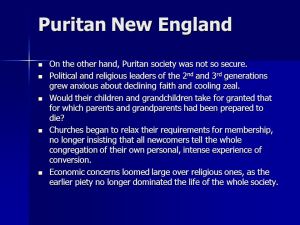 Soon after the founding of Massachusetts, events there proved the folly of their false theology and the truth of accurate biblical and historical interpretation. As Isaac Backus reported, by 1660 or 1670 Puritan theologians and pastors in New England were pointing out the “general religious declension” that was already taking place as the first generation of settlers passed away.[1] “Mr. Willard published a discourse in the year 1700 entitled, ‘The Perils of the Times Displayed,’ in which he said: 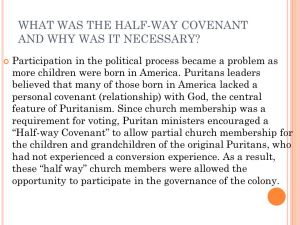 The Halfway Covenant, established by the Massachusetts synod in 1662, was witness to the spiritual decline of the Puritan Congregationalist church. This resulted in a large number of church members being baptized into the church without conversion. Any person who professed belief in the doctrines of Calvinism and who lived an upright, moral life was allowed to join the parish church and sign the covenant or membership contract. Such persons were only allowed halfway into the church—they could have their children baptized but they could not take communion or vote in church affairs. This was the method practiced in the church to which Isaac Backus’ parents belonged.[3]

[1] Isaac Backus, A History of New England With Particular Reference to the Denomination of Christians called Baptists, Volume 1 (Eugene, Oregon: Wipf & Stock Publishers, Previously published by Backus Historical Society, 1871), pp. 457-464. Examples of what the religious leaders were saying are given in those pages.