Click here to go to “Self-exam Questions: The Coming Universal Church Will Reign with the Lord“

Click here to listen to and/or download Jerald Finney’s audio teaching on “The church will reign with the Lord.“ Note that this audio teaching was significantly revised by this revised article on January 29,2013.

The Biblical Doctrine of the Church has links to the audio teaching of Jerald Finney on this and other subjects related to the doctrine of the church.

Note. This is a significantly revised version of Section II, Chapter 7 of God Betrayed: Separation of Church and State/The Biblical Principles and the American Application.

The Coming Universal Church Will Reign with the Lord

Several so-called universal “churches” were instituted and built by those who did not honor the word of God. Those “churches” killed untold millions of what they deem to be heretics (many of whom were born-again believers who refused to bow down to the false religion-state) while leading multitudes to hell since the initiation of the first such “church” in the early fourth century. Nonetheless, true believers in Christ, even in martyrdom, have always rejoiced in exceeding gladness. They will become members of the universal visible church which will be established at the marriage supper of the Lamb.

As explained in the last article, no universal church exists on earth. Rather, unbiblical “ universal” religious organizations were organized by the god of this world: first the Catholic “church,” then the Protestant “churches,” and many religious offshoots from biblical heresies and apostasies. Due to a lack of knowledge, wisdom, and understanding, some believers join or continue alongside the lost members of those organizations. Those believers are out of order. God’s desire is for them to seek out a local, autonomous, New Testament Church—i.e., a church which orders herself according to the principles of the New Testament. Only in such churches is the service of God in biblical order; and properly ordered New Testament churches have continuously existed since Jesus Christ ordained the institution of the church. Jesus said to Peter, “And I say also unto thee, That thou art Peter, and upon this rock I will build my church; and the gates of hell shall not prevail against it” (Mt. 16:18).

In spite of the steady movement toward the foretold end time political and religious Babylon, true Christians have the ultimate hope: they will reign with the Lord. This should be a cause for great rejoicing as well as incentive to be responsible members of the body of Christ, to make sure that every effort is made to glorify God, and  to assure that the individual, his family and the church he is a member of remains totally under Christ in every way.

The Holy Spirit is now calling out, not the subjects, but the co-heirs and co-rulers of the kingdom: 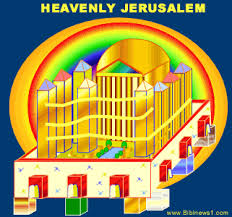 “Blessed are they which are persecuted for righteousness’ sake: for theirs is the kingdom of heaven. Blessed are ye, when men shall revile you, and persecute you, and shall say all manner of evil against you falsely, for my sake.  Rejoice, and be exceeding glad: for great is your reward in heaven: for so persecuted they the prophets which were before you” (Mt. 5.10-12).

“But ye are come unto mount Sion, and unto the city of the living God, the heavenly Jerusalem, and to an innumerable company of angels, To the general assembly and church of the firstborn, which are written in heaven, and to God the Judge of all, and to the spirits of just men made perfect,  And to Jesus the mediator of the new covenant, and to the blood of sprinkling, that speaketh better things than that of Abel” (He. 12:22-24).