A Publication of Separation of Church and State Law Ministry

Next Lesson:
Conclusion to Lessons on Religious Liberty in America

James Madisons first act, after the First Congress was organized, in 1789, was to propose, on June 8, certain amendments, including what is now the First Amendment. His purpose was to “conciliate and to make all reasonable concessions to the doubting and distrustful”—to those, the Baptists, who were concerned about the issue of religious liberty. “Of all the denominations in Virginia, [the Baptists] were the only ones that had expressed any dissatisfaction with the Constitution on that point, or that had taken any action into looking to an amendment.” The Baptists of Virginia had also corresponded with Baptists of other states to “secure cooperation in the matter of obtaining” a religious liberty amendment. No other denomination asked for this change.[1] A general committee of Baptist churches from Virginia presented an address to President Washington, dated August 8, 1789, expressing concern that “liberty of conscience was not sufficiently secured,” perhaps because “on account of the usage we received in Virginia, under the regal government, when mobs, bonds, fines and prisons, were [their] frequent repast.”[2] President Washington assured them that he would not have signed the Constitution if he had had the slightest apprehension that it “might endanger the religious rights of any ecclesiastical society.”[3] 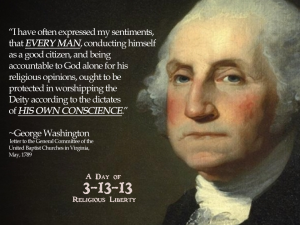 Some Baptists and others did not see the need for a religious freedom amendment. Indeed, the First Amendment may not have been necessary to guarantee separation of church and state. Isaac Backus was elected as a delegate to the Massachusetts convention of January, 1788, which considered the issue of ratification of the new Constitution. He spoke at the convention. 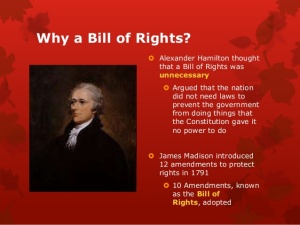 Even Madison, who proposed and fought for the First Amendment, did not believe that it was necessary for the security of religion. He wrote in his Journal on June 12, 1788:

Others were against a bill of rights. “James Wilson argued that ‘all is reserved in a general government which is not given,’ and that since the power to legislate on religion or speech or press was not given to the Federal government, the government did not possess it, and there was therefore no need for an express prohibition.”[6] “Alexander Hamilton argued that a bill of rights, not only was unnecessary, but would be dangerous, since it might create the inference that a power to deal with the reserved subject was in fact conferred.”[7]

The amendment was adopted on September 25, 1789, and was approved by the required number of states in 1791.

“No more fitting conclusion can be had … than to quote the language of the Father of his country. The days of persecution, of blood and of martyrdom were passed. Civil and soul liberty, the inalienable rights of man, enlargement, benevolent operations, educational advantages, and worldwide missionary endeavor, all had been made possible by the struggles of the past. The Baptists consulted George Washington to assist in the securing freedom of conscience. He replied: