Previous Lesson:
IV. Baptists in Virginia Colony; The Bad Character of the Anglican Clergy; Colonel Sam Harris and Other Baptist Preachers; The Separate and Regular Baptists

Next Lesson:
VI. The Period of Intolerance and Persecution in Virginia Ends in 1775 with the Beginning of the Revolution; The Baptists Push for Religious Freedom

From 1768 through 1774, the Baptists were persecuted severely. “Baptist preachers were whipped, arrested, fined, imprisoned on bread and water, although the authorities sanctimoniously denied that punishment was for ‘preaching’; the crime they said, was ‘breach of the peace.’”[1] The first instance of actual imprisonment was on June 4, 1768, when John Waller, Lewis Craig, James Childs, James Reed, and William Marsh were arrested at Craig’s meetinghouse in Spotsylvania and charged with disturbing the peace. The magistrates offered to release them if they would promise to preach no more for a year and a day. They refused and were jailed. Many more were jailed and 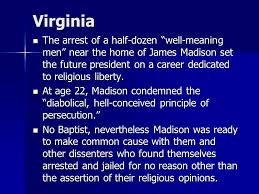 Because of the persecutions and oppressions, Baptists began to petition the House of Burgesses for relief. Their first petition in 1770 requesting that Baptist ministers “not be compelled to bear arms or attend musters” was rejected. Other petitions from Baptists in several counties were submitted in 1772 requesting that they “be treated with the same indulgence, in religious matters, as Quakers, Presbyterians, and other Protestant dissenters enjoy.” The petitions continued until 1775.[6] The Presbyterians petitioned also, but for the right to incorporate so that they could receive and hold gifts of land and slaves for the support of their ministers. One of the Presbyterian petitions was improperly hailed as proof “that the Presbyterians anticipated the Baptists in their memorials asking for religious liberty.” An examination of that petition reveals that it “contemplate[d] nothing more than securing for Presbyterians and others in Virginia the same privileges and liberties which they enjoyed in England under the Act of Toleration,” and contained no “attack upon the Establishment, or any sign of hostility to it.”[7]

During this time, James Madison wrote to his old college friend, Bradford of Philadelphia, in a letter dated January 24, 1774. He expressed his belief that if