Links to other resources on the authority Issue:

Click here to order from Amazon (all books available in Kindle, two in printed form)

Online version of
Render Unto God the Things that Are His: A Systematic Study of Romans 13 and Related Verses:

The above online version of the book Render unto God the Things that Are His: A Systematic Study of Romans 13 and Related Verses is also on “The Biblical Doctrine of Separation of Church and State” page of this blog.

See the article “More on Romans 13.1-2: The Powers That God Has Ordained” by clicking here.

See “A Short Treatise on Romans 13” by Clicking here.

Jerald Finney Lectures on Hierarchy of Law (CD of speech at Old Paths Baptist Church in Fayetville, TN. given on the Sunday the church formally adopted the Declaration of Trust)

Romans 13:3-4: “For rulers are not a terror to good works, but to the evil. Wilt thou then not be afraid of the power? do that which is good, and thou shalt have praise of the same: For he is the minister of God to thee for good. But if thou do that which is evil, be afraid; for he beareth not the sword in vain: for he is the minister of God, a revenger to execute wrath upon him that doeth evil.” In these verses, God defines the jurisdiction of civil government. After all, God is the highest power. God, the highest power, ordained the powers that be (the lower powers) (Romans 13:1). Can the laws of a lower power take precedence over the laws of a power above? When one is faced with obeying a lower power or a higher power, whom is one to obey? Is one to obey the lower power when the laws of the lower power are contrary to the laws of the higher power? Whom is one to fear more, according to the Word of God?   “And fear not them which kill the body, but are not able to kill the soul: but rather fear him which is able to destroy both soul and body in hell” (Matthew 10:28). Romans 13:8-14 lays out the responsibility of man under lawful civil government, to keep the last table of the Ten Commandments which deal with man’s relationship to man.

See the article “More on Romans 13.1-2: The Powers That God Has Ordained” by clicking here.

Exodus 1:15-17: “And the king of Egypt spake to the Hebrew midwives, of which the name of the one was Shiphrah, and the name of the other Puah: And he said, When ye do the office of a midwife to the Hebrew women, and see them upon the stools; if it be a son, then ye shall kill him: but if it be a daughter, then she shall live. But the midwives feared God, and did not as the king of Egypt commanded them, but saved the men children alive.”

Exodus 1:20-21: “Therefore God dealt well with the midwives: and the people multiplied, and waxed very mighty. And it came to pass, because the midwives feared God, that he made them houses.”

[Continued after the resources directly below]

Article: “American Abuse of Romans 12.1-2 and Related Verses.” This article shows the biblical bankruptcy of the false teaching that Romans 13 and some other verses taken out of context teach almost unlimited submission by Christians and churches to civil government. This article was not included in Render Unto God The Things That Are His.

Joshua 2:3-4: “And the king of Jericho sent unto Rahab, saying, Bring forth the men that are come to thee, which are entered into thine house: for they be come to search out all the country. And the woman took the two men, and hid them, and said thus, There came men unto me, but I wist not whence they were:”

Joshua 2:8-15  ”And before they were laid down, she came up unto them upon the roof; And she said unto the men, I know that the LORD hath given you the land, and that your terror is fallen upon us, and that all the inhabitants of the land faint because of you.  For we have heard how the LORD dried up the water of the Red sea for you, when ye came out of Egypt; and what ye did unto the two kings of the Amorites, that were on the other side Jordan, Sihon and Og, whom ye utterly destroyed. And as soon as we had heard these things, our hearts did melt, neither did there remain any more courage in any man, because of you: for the LORD your God, he is God in heaven above, and in earth beneath.  Now therefore, I pray you, swear unto me by the LORD, since I have shewed you kindness, that ye will also shew kindness unto my father’s house, and give me a true token: And that ye will save alive my father, and my mother, and my brethren, and my sisters, and all that they have, and deliver our lives from death. And the men answered her, Our life for yours, if ye utter not this our business. And it shall be, when the LORD hath given us the land, that we will deal kindly and truly with thee.  Then she let them down by a cord through the window: for her house was upon the town wall, and she dwelt upon the wall.” 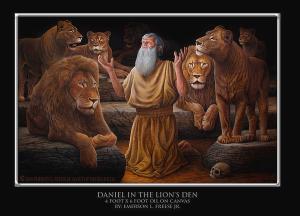 Daniel 6:10-11: “Now when Daniel knew that the writing was signed, he went into his house; and his windows being open in his chamber toward Jerusalem, he kneeled upon his knees three times a day, and prayed, and gave thanks before his God, as he did aforetime. Then these men assembled, and found Daniel praying and making supplication before his God.”

Daniel 6:16: “Then the king commanded, and they brought Daniel, and cast him into the den of lions. Now the king spake and said unto Daniel, Thy God whom thou servest continually, he will deliver thee.”

Daniel 3:8-11: “Wherefore at that time certain Chaldeans came near, and accused the Jews. They spake and said to the king Nebuchadnezzar, O king, live for ever. Thou, O king, hast made a decree, that every man that shall hear the sound of the cornet, flute, harp, sackbut, psaltery, and dulcimer, and all kinds of musick, shall fall down and worship the golden image:  And whoso falleth not down and worshippeth, that he should be cast into the midst of a burning fiery furnace.”

Daniel 3:16-18: “Shadrach, Meshach, and Abednego, answered and said to the king, O Nebuchadnezzar, we are not careful to answer thee in this matter. If it be so, our God whom we serve is able to deliver us from the burning fiery furnace, and he will deliver us out of thine hand, O king. But if not, be it known unto thee, O king, that we will not serve thy gods, nor worship the golden image which thou hast set up.”

Acts 5:17-20: “Then the high priest rose up, and all they that were with him, (which is the sect of the Sadducees,) and were filled with indignation,  And laid their hands on the apostles, and put them in the common prison. But the angel of the Lord by night opened the prison doors, and brought them forth, and said, Go, stand and speak in the temple to the people all the words of this life.”

Acts 4:19-21: “But Peter and John answered and said unto them, Whether it be right in the sight of God to hearken unto you more than unto God, judge ye. For we cannot but speak the things which we have seen and heard. So when they had further threatened them, they let them go, finding nothing how they might punish them, because of the people: for all men glorified God for that which was done.”

Acts 4:23-31: “And being let go, they went to their own company, and reported all that the chief priests and elders had said unto them. And when they heard that, they lifted up their voice to God with one accord, and said, Lord, thou art God, which hast made heaven, and earth, and the sea, and all that in them is: Who by the mouth of thy servant David hast said, Why did the heathen rage, and the people imagine vain things? The kings of the earth stood up, and the rulers were gathered together against the Lord, and against his Christ. For of a truth against thy holy child Jesus, whom thou hast anointed, both Herod, and Pontius Pilate, with the Gentiles, and the people of Israel, were gathered together, For to do whatsoever thy hand and thy counsel determined before to be done. And now, Lord, behold their threatenings: and grant unto thy servants, that with all boldness they may speak thy word, By stretching forth thine hand to heal; and that signs and wonders may be done by the name of thy holy child Jesus. And when they had prayed, the place was shaken where they were assembled together; and they were all filled with the Holy Ghost, and they spake the word of God with boldness.”

Acts 5:27-29: And when they had brought them, they set them before the council: and the high priest asked them, Saying, Did not we straitly command you that ye should not teach in this name? and, behold, ye have filled Jerusalem with your doctrine, and intend to bring this man’s blood upon us. Then Peter and the other apostles answered and said, We ought to obey God rather than men.”

Let every soul be subject unto the higher powers? Romans 13 (Chapter 4 of Render Unto God the Things that Are His) continues with many more Bible examples from both the Old and New Testaments which record instances of God’s children obeying God rather than man. The chapter also gives historical examples from the history of the last 2000 years.

Render unto God the Things that Are His: A Systematic Study of Romans 13 and Related Verses
(Click to go directly to PDF)

Information on Books by Jerald Finney: