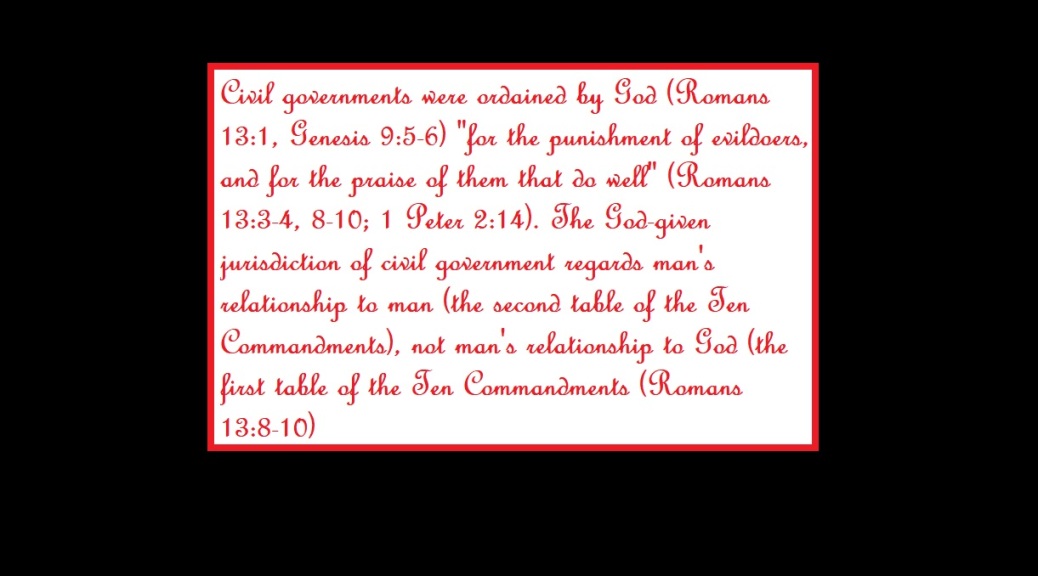 1 Let every soul be subject unto the higher powers. For there is no power but of God: the powers that be are ordained of God.

2 Whosoever therefore resisteth the power, resisteth the ordinance of God: and they that resist shall receive to themselves damnation.

3 For rulers are not a terror to good works, but to the evil. Wilt thou then not be afraid of the power? do that which is good, and thou shalt have praise of the same:

5 Wherefore ye must needs be subject, not only for wrath, but also for conscience sake.

6 For for this cause pay ye tribute also: for they are God’s ministers, attending continually upon this very thing.

7 Render therefore to all their dues: tribute to whom tribute is due; custom to whom custom; fear to whom fear; honour to whom honour.

8 Owe no man any thing, but to love one another: for he that loveth another hath fulfilled the law.

10 Love worketh no ill to his neighbour: therefore love is the fulfilling of the law.

11 And that, knowing the time, that now it is high time to awake out of sleep: for now is our salvation nearer than when we believed.

12 The night is far spent, the day is at hand: let us therefore cast off the works of darkness, and let us put on the armour of light.

13 Let us walk honestly, as in the day; not in rioting and drunkenness, not in chambering and wantonness, not in strife and envying.

14 But put ye on the Lord Jesus Christ, and make not provision for the flesh, to fulfil the lusts thereof.

EN [i] Has links to more studies on Romans 13 and related verses.

A Short Treatise on Romans 13

God, the Highest Power established an hierarchy of law. God is the highest power. He is at the top of the hierarchy. Every lower power is subject to him. He is over the individual, the family, the civil government, and the local church. Each lower power ordained by God is subject to the earthly powers above it (13:1-2). God is the judge of every lower power. Certainly, a lower earthly power has no authority to overrule the God-given authority of any higher earthly power above it, unless that power becomes tyrannical and acts outside its God-given jurisdiction. The individual is subject to God in spiritual matters and to civil government as to certain worldly sins against the life, liberty, and property of his fellow man. Each lower power is given free will and can decide whether to obey the Supreme Power and any higher earthy power acting within its God-given jurisdiction.

The New Testament, not to mention the Old Testament, records the activities of many who did not bow down to civil government when civil government acted outside its God-given jurisdiction: Jesus Christ, Stephen as recorded in Acts 7, those Christians who were sought and persecuted by Paul and the Jewish religious crowd before he became an apostle, all the apostles. According to history, Christians from the beginning of the dispensation of grace to this very day have been and are being persecuted for not bowing down to earthly civil governments or earthly establishments, unions of religion and state.

The Apostle Peter, who wrote “… obey every ordinance of man …” (1 Peter 2:13; see the immediate context of that statement in your Bible) understood God’s hierarchy of law. He and John were arrested after healing the lame man and preaching in the name of Jesus. The authorities ordered them not to speak at all nor teach in the name of Jesus, threatened them, and let them go. Then, they immediately:

Notice their prayer. They understood God’s hierarchy of law. They quote from Psalms 2, which is particularly instructive on the matter of the authority of God and of Gentile civil government. They knew that all the work they did for God was to be done in the name of Jesus, under the authority of God. They understood that the earthly power has assumed unlawful jurisdiction over the things of God. After their prayer, they continued to do what God commanded them to do, contrary to their orders for their earthly authority who has stepped outside their jurisdictional authority.

Most American “Christians” walk in darkness. They carelessly cite Romans 13 when asked about their submission to the authority of civil government in all things. Some will qualify their submission with, “If the government ever tells me that I cannot preach salvation, they will have crossed the line.” They eliminate all the commandments and precepts to Christians in the New Testament but one. They fight on one front only, while Satan has been very active on all fronts. When the day of reckoning comes, many or most of those sort will obey civil government when told they cannot preach salvation. As the Lord, the apostles, and martyred and persecuted Christians since the beginning of the New Testament churches have understood, believers and churches are to be soldiers for the Lord Jesus Christ, and to engage in the spiritual warfare He has commanded us to fight (2 Timothy 2:1-7; Ephesians 6:10-18). “The night is far spent, the day is at hand: let us therefore cast off the works of darkness, and let us put on the armour of light” (13:12).

EN [i] Render Unto God the Things that Are His: A Systematic Study of Romans 13 and Related Verses and other works cited on that page.

Command; the right of governing, or actual government; dominion; rule, sway; authority…. The powers of government are legislative, executive, judicial, and ministerial…. Power is no blessing in itself, but when it is employed to protect the innocent. Under this sense may be comprehended civil, political, ecclesiastical, and military power. 13. One invested with authority; a ruler; a civil magistrate. Romans 13:1.

“Legal power, or a right to command or to act; as the authority of a prince over subjects, and of parents over children. Power; rule; sway.” or “Government; the persons or the body exercising power or command; as the local authorities of the states.” (1828 WEBSTER’S DICTIONARY, definition of “authority.”)

Status as a legal entity of any kind is a product of man-made law (civil government law) and gives the civil government authority over the church in many matters. Civil government, man’s law, creates and is sovereign, for many purposes, over a corporation sole or aggregate, an Internal Revenue Code § 501(c)(3) or § 508(c)(1)(A) federal tax exempt organization, a charitable trust, etc.

noun Direction; regulation. These precepts will serve for the government of our conduct.

EN [iii] Ordinance means, in this context: “A rule established by authority; a permanent rule of action. An ordinance may be a law or statute of sovereign power. In this sense it is often used in the Scriptures. Exodus 15:25. Numbers 10:8. Ezra 3:10.”

EN [iv] See God Betrayed/Separation of Church and State: The Biblical Principles and the American Application, Part One, Section I, The Biblical Doctrine of Government.