Previous Lesson:
(1) Introduction: Render Unto God the Things that Are His.

For a more thorough study on this, click here. 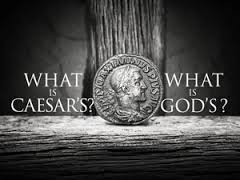 Another scripture relied upon to support the false teaching of unlimited submission to the civil government is Luke 20.25 (also recorded in Matthew 22.21; and Mark 12.17). The Bible teaches that God is over is over all governments including civil government.[1] Nonetheless, many Americans, in spite of the teaching of the Bible, grab the following words of Jesus and apply the incorrect Americanized interpretation: “Render unto Caesar the things that are Caesar’s; and unto God the things that are God’s.”[2]

Obviously, Jesus is saying that both Caesar and God have jurisdictions. What are those jurisdictions? Are America and many pastors correct in teaching church members that they cannot depend totally upon God to supply their needs, that they need and can better serve the Lord with civil government contrived protection through incorporation and tax-exemption, and/or that America, not God, is to be their omniscient, omnipotent benefactor?[3]

In the immediate context, the Pharisees were instigating an attack upon the Lord Jesus. “Then went the Pharisees, and took counsel how they might entangle him in his talk.”[4] The chief priests and the scribes “sought to lay hands on [Jesus]; and they feared the people.”[5]

They wanted the civil government to do the dirty work which they would not do themselves because they feared the people.

The Lord, being God, knew their plan: “But Jesus perceived their wickedness, and said, Why tempt ye me, ye hypocrites?”[8] Jesus said, “Shew me a penny. Whose image and superscription hath it?”[9]  When “[t]hey answered and said, Caesar’s,”[10] He gave His famous reply which left them amazed and unable to fulfill their plan.

In the overall context of Scripture, what was the Lord saying? The Pharisees knew the Old Testament. When Jesus asked whose image and superscription were on the coin, they most likely knew that He was saying that mankind, which included Caesar, was created by God in the image of God, and that Caesar as a ruler was given his authority with limitations by God. They knew the Scripture that said, “So God created man in his own image, in the image of God created he him; male and female created he them.”[11] They knew the Scriptures that taught that God was the Supreme Ruler, that His was the Supreme Government as well as those Scriptures that taught that God ordained civil government and all other governments. They also knew that Jesus claimed to be God. For example, when Jesus asked the Jews for which of His good works they took up stones to stone Him, “The Jews answered him, saying, For a good work we stone thee not; but for blasphemy; and because that thou, being a man, makest thyself God.”[12]  In one short statement, the Lord, as only He could, summarized, in the context of Scripture, God’s jurisdiction (rulership over all men and governments including civil governments) and civil government’s God-given jurisdiction (as laid out in the Bible and discussed in Section I of God Betrayed).

The result of this interchange was the opposite of what the Pharisees had hoped for. Since it was not yet His time to be crucified, God defeated their purpose by the power of His Word. “And they could not take hold of his words before the people: and they marveled at his answer, and held their peace[,]”[13] “and left him, and went their way.”[14]

Men today, as did these Pharisees, prefer to trust in their own doings instead of the perfect righteousness of Christ. Isaac Backus, the great eighteenth century Baptist leader, pointed out the darling of such men:

[3] Section VI of God Betrayed and Separation of Church and State deal with the incorporation and tax exemption issues.